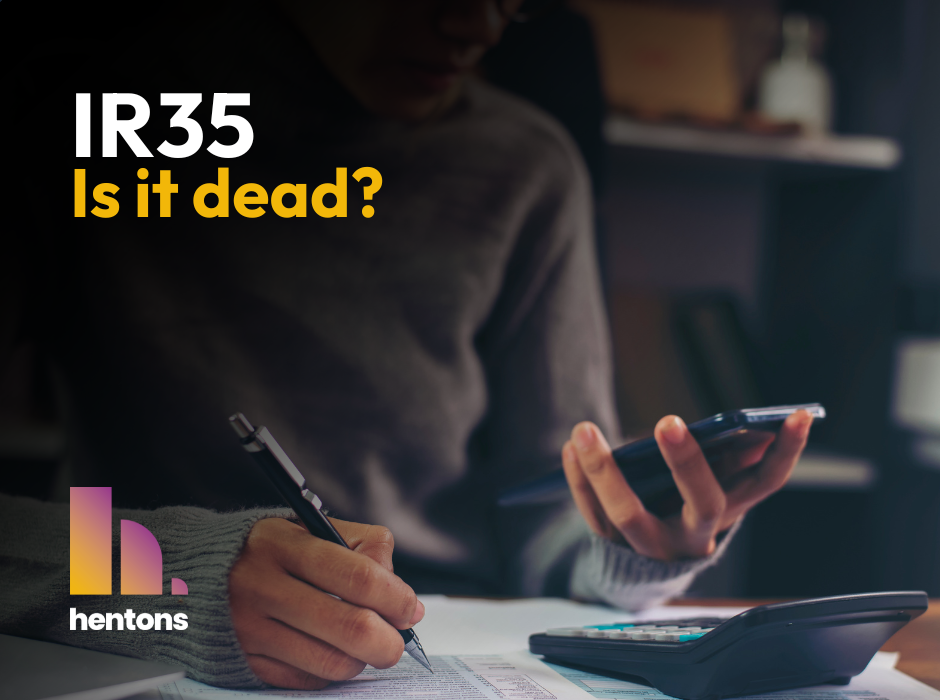 Many contractors were jumping for joy last Friday when Kwasi Kwarteng announced in his mini budget that he would simplify the IR35 rules. In taking action to reverse the unnecessary complexity and costs for many businesses he intends to repeal the 2017 and 2021 reforms. This is being interpreted by many businesses that, IR35 is now dead.

The IR35 rules were introduced to make sure that workers providing services for their client through their own personal service companies, who would normally provide their services direct to that client, pay broadly the same amount of Income Tax and National Insurance as they would have done if they were directly employed by that client.

The introduction of the off-payroll rules in 2017 and 2021 reformed the IR35 rules to change the decision-making element for compliance from the worker to the client or recruitment agency.

What did the Chancellor actually say?

In his Growth Plan for 2022 at paragraph 3.44 the Chancellor stated

This seems to support what many believe to be an end to IR35. It is however important, as with all legislative matters, to read to the end of the paragraph or document to understand the matter fully.  In this case, paragraph 3.44 concluded with the statement

“From this date, workers across the UK providing their services via an intermediary, such as a personal service company, will once again be responsible for determining their employment status and paying the appropriate amount of tax and NICs.”

The statement actually is therefore saying that it is only the off-payroll rules which are being repealed but the considerations under IR35 would still remain for workers utilising personal service companies after 6th April 2023. The position is therefore seeming to revert to that which existed before 6th April 2021.

This clearly means that IR35 will continue to exist from 6 April 2023 onwards, be it in a slightly modified form where the legislation will have to be revised to remove reference to the off-payroll rules.

What will this mean in reality?

HMRC will continue conducting enquiries into personal service companies and their engagers, both under the off-payroll rules (for periods from 2017 to 2023) and under the IR35 rules for periods before 6 April 2021 and after 5 April 2023.

We will therefore have 2 connected regimes within the complex area of the employment status to decide the actual status of an individual worker. Specifically with regard to IR35 there are also many cases involving well known figures  such as: Adrian Chiles, Kaye Adams and Paul Hawksbee. There is also a further high profile case involving the Premier League Referees which is heading to the Supreme Court next year.

A recent statement by the president of The Chartered Institute of Taxation stated “Consultation is needed not only on the future of IR35, but also on how the employment status of a worker is established for tax purposes and what the differences should be in the taxes paid of the different status. Without a thorough review of this area, we risk a return to the ‘bad old days’ when non-compliance was rife.”

Are the bad old days to return?

With careful planning by engagers where contracts are drawn up based on the factual relationship of the parties, a decision as to whether IR35 would apply can be addressed and the uncertainties of old can be avoided. The sooner a determination as to whether a particular worker is caught or not caught by IR35 the better as it is going to be difficult to reverse a decision made now after 6th April 2023.

There are particular concerns with regard to certain low paid workers where the removal of the off-payroll working rules may mean that they will be forced to work through limited companies by agencies or umbrella companies, as was the norm before off-payroll came into effect. This used to save some money within a supply chain but it created significant problems for workers especially if HMRC do not have the resources to enforce anti-avoidance legislation. This could bring about a return to the days of disregarding the rules to increase profit and reduce obligations within a supply chain.

How can Hentons help?

Our experienced Tax Advisory team are able to offer a full “health check” review of any existing or proposed working arrangement to decide as to whether the contractual arrangement will be affected by the proposed changes.